White
Aisha Alnazar is the mother of Asra, and a powerful magician that once lived in Vesuvia. She first appears in Asra's route during the end of Book XVII - The Star, but makes her full debut in Book XVIII - The Moon. Her patron arcana, shared with her husband, Salim, is the Lovers.

Aisha, being Asra's mother, shares a lot of similarities with him. They both have rich golden brown skin and violet eyes. Her white hair, another feature she passed down to them, is partially pulled back behind a white scarf. And even her face has a fascinating likeness to Asra's features. Her clothing is bright and colorful: she wears a long magenta dress, lilac west heavy decorated with gold and a vibrant pink sash.

Her old design featured a hijab, which was removed due to controversy, as she was Muslim-coded character as well as a practitioner of magic.

Aisha is fiercely loyal to her family and ready to do anything for them. It is no coincidence the Devil exploited these feelings to put forward his own agenda. Despite her love and need to reconnect with Asra, Aisha understood his doubts and answered them with patience and care. When she understood the Apprentice had a relationship with him she was ready to take them into the fold as her own family.

Much like Salim, not much is know of her past. She settled into Vesuvia with her family during an unknown point of time, finding happiness and peace alongside her husband and young child, Asra. She, alongside Salim, were most likely contracted by Lucio to construct a mechanical arm for him, one unlike any other. They toiled over the creation, ensuring it was perfect for the new Count.

However, they were met with harsh backlash when they delivered the golden limb, thrown into the dungeons. She was separated from Salim, locked into a room enchanted to dampen and restrict magic use. Being told she would be executed, she only worried about Salim and Asra. It was there in the cell that she was found by the Devil. She forged a deal with the Devil to free her husband, and protect her child, unaware that Salim was offered the same thing, and accepted it just the same.

They were thrown into the Arcana realms, locked within their own personal gateway, and have been trapped there since, leaving behind their now orphaned young child. 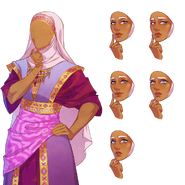 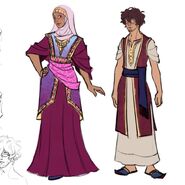 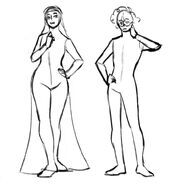