Grey-brown
Mazelinka is an old friend of the Devoraks. She's first introduced at the end of Chapter 3 of Book VI - The Lovers, during Julian's route, after he and the apprentice jump through her window looking for a place to hide from the palace guards.

Mazelinka is an older woman with a sharp tongue and a fighting spirit. She has a motherly fondness for both Portia and Julian, having known them since they were small children. She often still takes care of Julian, as he is quite a troublemaker and doesn't take good care of himself. She makes sure he gets rest when he visits her, even going so far as to make soup that will make him drowsy.

When Julian and the apprentice break into her house through the window, she's not at all surprised by his dramatic entrance, but she scolds him for damaging her yellow flowers by the window. During this time Julian also states that she's sharp as a hook and great at cards.

In the past, Mazelinka was a pirate that would sail to Nevivon a few times a year visit the love of her life, Lilinka, a village elder.

The summer she met Julian and Portia, there was a storm that made the sea rougher than she'd ever seen before. She recalls that the storm was as black as the devil's heart. It was unnaturally powerful and sank a dozen ships that night, and Mazelinka says she nearly went overboard two or three times herself.

When she made it to Nevivon, she saw the wreckage of the ship Julian and Portia had been on. At the time, the two were children, and had lost their family in the shipwreck. Mazelinka brought them to Lilinka and sailed out again once the skies cleared.

Every few months she'd come back to see them, and Mazelinka became an 'honorary grandma'. She brought them presents every time she came, which Julian always looked forward to when seeing her ship pulling up to the docks. One of the presents she gave Portia was a slingshot.

When the young Devoraks would ask if they could run off and be pirates with her, she always told them they couldn't until they were tall enough to reach the rigging. Once they were older, she took them on small trips with her and taught them how to sail. They would also ask her to teach them how to fight, and Mazelinka tried to teach Julian how to properly sword fight after seeing him swing around a makeshift stick sword improperly.

Mazelinka says that Lilinka used to call them her little adventurers. It's presumed Lilinka passed away, as Mazelinka talks about her in the past tense, and says she 'would have' loved the apprentice.

Mazelinka also helped Julian to escape Vesuvia when he had been accused of murdering the Count. She smuggled him onto her pirate ship via a case of rum, set them on course for the South, and gave him his iconic eyepatch to disguise himself with.

The master gunner of the ship. A seemingly sullen and grouchy man who always ends up in trouble with explosives. Cheeky and friendly with Mazelinka.

Keto is the quartermaster of the ship and has been a member of Mazelinka's crew from the beginning.

Rowdy, mischief-making twins whose job it is to "party and hit things hard."

For a period of time, Nahara became a passenger on her ship. Nahara and Mazelinka ended up being sparring partners and are friendly with each other. Nahara mentions to Portia that "It's been a privilege to train with her." 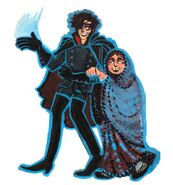