Scourge of the South

Muriel is one of the six available love interests. Asra's oldest friend, Muriel lives in the forest on the outskirts of Vesuvia and rarely shows himself except to occasionally keep watch over The Apprentice.

The Apprentice is said to have met him multiple times, however, Muriel has a 'curse' that causes people to forget him and thus they can not remember him. He is described as 'the fearsome outsider who owes an onerous debt.' His patron Arcana is The Hermit.

Muriel is a very large man, standing at 6'10. His black hair has been haphazardly cut short and falls into his green eyes. Muriel is typically shirtless, revealing a toned body crisscrossed with numerous scars. He has a number of belts wrapped around his waist, including one that holds up the animal pelts that hang over his gray pants. Over everything, he wears a ragged black pelt with a hood. Muriel also wears shackles and a heavy collar with the chains snapped off. In several routes, these chains are later completely broken. He is noted by the Apprentice to smell like myrrh.

Muriel is practical and withdrawn, preferring to spend his time alone. He is largely detached from the bustle of Vesuvia, traveling into the city only by Asra's request. This stems largely from his fear of hurting others, as his time playing a villain in the coliseum is something he deeply regrets and wants to escape from. Muriel's 'curse' is a product of this fear, allowing him to disappear and be forgotten by others. Muriel does, however, reveal that he is afraid of being unwanted, coming from his belief that his parents sent him away because he was a burden. This seems to indicate that Muriel does not truly like being alone, but rather isolates himself as a form of punishment or necessity. He is overly conscious of taking up space and resources, revealing to the Apprentice during the masquerade that he has never really indulged in food, and only eats because he needs to.

Despite his fearsome appearance, Muriel is gentle with those he cares for. He loathes violence and frequently remains placid even when given a reason to be angry. His refusal to fight back against potential aggressors is often to his detriment, although during his own route he slowly learns to be more confident in himself and realizes his worth.

Muriel's magic is described as earthy and tied to nature. He gets along well with animals. He lives in the woods with many chickens, and his wolf companion Inanna, who frequently attempts to get him out of his shell.

Muriel was born to the nomadic Kokhuri tribe that roamed the Shining Steppe south of Vesuvia. When he was still very young, he was separated from his parents and brought to Vesuvia by a traveling merchant. Muriel recalls that 'people from the woods' arrived as winter approached one year, and subsequently raided the Kokhuri and took everything they had. With no food left, his family sent him away with the merchant. Muriel believed he was sent away because they saw him as a burden. In truth, his parents sent him away to save him. The tribe that raided the Kokhuri was the Scourge of the South, a notorious raider clan both Morga and Lucio hailed from. Muriel's mother had a prophetic vision that the Kokhuri would win the battle with the Scourge and end their reign of terror on the steppe. However, she also saw that the Kokhuri would suffer terrible losses. Muriel's parents, knowing they would not survive the ensuing battle, sent Muriel with a timely merchant to protect him and ensure his survival. Muriel would eventually end up in Vesuvia, left an orphan on the streets.

As a young boy, Muriel was targeted by a street gang of other orphans, who wanted to use his size and strength to help them steal. Muriel appeared to largely ignore their attempts to recruit him, although he would occasionally perform tasks for the gang in exchange for food. One of these tasks was to recruit a new orphan due to his speed. This orphan ended up being Asra. After a freshly named Count Lucio confronted Muriel and the group of thieves for stealing a smoked eel, Asra intervened by distracting the Count and helping Muriel escape his scrutiny. The two became tentative friends, their friendship later growing into a close bond. Asra appears to have taught Muriel some magic, and the two would eventually move in to a hut together on the outskirts of Vesuvia. Muriel doesn't appear to enjoy recounting his childhood on the streets, saying that it was "bad."

Muriel's encounter with Count Lucio as a child would continue to haunt him. Lucio, perhaps impressed with Muriel's stature and presence, appears to have coerced Muriel into becoming his gladiator in the coliseum for a time. Muriel seemed to believe he was protecting Asra from Lucio by doing what he wanted, although he would later learn Asra was also doing things to protect Muriel from the Count. During his time as Lucio's champion, he portrayed a Heel character, fighting aggressively as a villain and performing brutal executions. He became known as 'The Scourge of the South,' so named for Lucio's tribe. Eventually, Muriel reached his breaking point when he was forced to fight an injured wolf that had been captured by poachers and brought to Vesuvia to be killed for entertainment. Seeing as the wolf was unwilling to fight him, Muriel took her and fled from the coliseum for good. Inanna, as she came to be called, became Muriel's animal companion and familiar.

Muriel cut his long hair after leaving the coliseum, but would retain the chains and shackles as a reminder of what he had done there. Muriel became a recluse, living in his hut in the woods. He would occasionally leave to visit Asra in the city, as he had moved in to the Apprentice's shop. When Asra would later go to the palace during the Red Plague, Muriel came to the shop to ask him not to go, worrying that Asra would get his heart ripped out by Lucio.

Night of the Masquerade

The night of the Masquerade, Muriel, like the other participants, was under a compulsion to partake in Lucio's ritual. During the ritual, he made a deal with one of the Major Arcana (possibly the Hermit) for a special ability that would make people forget they ever met him once he left their sight. This is the reason the Apprentice doesn't remember seeing him on the streets or in their dreams despite having met him multiple times.

Later, Asra sent Muriel to find Julian in the dungeons. Using the Red Beetle key, Muriel opened Julian's cell and brought him to Lucio's rooms, although they were already on fire. Julian ran in and Muriel simply left.

After the Apprentice is revived, Muriel is tasked with watching over them whenever Asra is away. He appears to have a slight dislike for the apprentice, although the reason why is unknown.

The Apprentice encounters Muriel as they are leaving their shop to answer Nadia's summons. Muriel is blocking their path, and the Apprentice can either walk past him or ask him to move. Regardless, he ends up giving them a cryptic warning about the palace before vanishing. The apprentice is bewildered but quickly forgets the encounter, due to Muriel's ability, and continues on their way. When the Apprentice returns to the shop, they find a satchel of myrrh on their doorstep left by Muriel.

The Apprentice can encounter Muriel a final time during the masquerade announcement in the town square. There, they notice his hulking form and recognize the scent of myrrh from the bundle of protective herbs on their doorstep. They follow Muriel, who gives them another mysterious warning. A paid option allows them to further interrogate him, asking him if he is alright, and if he knows Asra. Muriel reveals that he knows Asra better than anybody, as he is his only friend. The apprentice has the opportunity to offer Muriel their friendship, which he quickly rejects. After bumping into a carriage, the apprentice loses Muriel in the crowd and promptly forgets about him.

The Apprentice does not initially know Muriel, although they have met several times. During his route, Muriel tells the Apprentice he did not know them very well when they were alive, but after their revival he was frequently asked to watch over them when Asra was away. In other's routes he is neutral towards the Apprentice, although in Asra's route he seems to dislike them somewhat. This appears to be because he views Asra's love for them as an unhealthy obsession. He does still appear to be concerned for the apprentice in his own way, offering warnings of the palace during the prologue.

During his own route, Muriel starts off wary of the apprentice and their intentions, begrudgingly allowing them inside his hut to assist him with his wounds. Muriel slowly begins to open up to the apprentice, becoming more confident in himself in the process. This elicits excitement from Asra, who believes the two are good for each other. The apprentice can help Muriel to accept his past, as well as show him that he deserves nice things. Although he continues to become flustered when the apprentice shows him affection, Muriel slowly becomes comfortable in their presence. Towards the end of his route, Muriel has become intensely fond and protective of the apprentice.

Asra is Muriel's best and, by his own admission, only friend. The two met as children seventeen years before the game is set, both orphans living on the streets of Vesuvia. After a freshly named Count Lucio confronted Muriel and a group of thieves for stealing a smoked eel, Asra intervened by distracting the Count and helping Muriel escape his scrutiny. The two became tentative friends, their friendship later growing into a close bond. Asra and Muriel lived together around the wharf, and would later move in to a small hut in Vesuvia's outlying forest. Although Asra tries to recall their childhood more fondly, Muriel describes it simply as 'bad'. To make money, Muriel carved and painted Masquerade masks for Asra to sell in the city. When the two were older, Muriel became the champion fighter of Lucio's coliseum in order to protect Asra, while Asra also did unsavory tasks for Muriel's protection without either knowing of the other's arrangement until later on.

Muriel watches over the apprentice for Asra when he is out of town due to their friendship. Asra appears to come to Muriel when he needs help. Notably, during Muriel's route, Asra comes to Muriel first when he thinks the Apprentice has been hurt.

In Nadia's Upright Ending, Muriel and Asra are shown to have developed a romantic relationship. 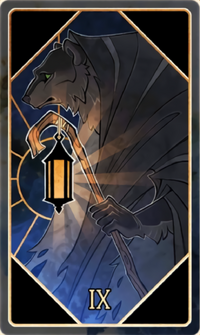 Click to view the gallery for Muriel.
Community content is available under CC-BY-SA unless otherwise noted.
Advertisement