Nafizah is the eldest of the seven Satrinava sisters and the Crown Princess of Prakra. Her patron arcana is The World.

Nafizah is a tall stately woman with intense golden eyes, her presence almost otherworldly. She has olive skin and long straight white to pink ombre hair which is worn as a braid down the front of her body.

She dresses in what appears to be long pale pink robes with golden adornments, paired with a deep pink tube top. An ensemble of a golden circlet and a necklace both embedded with purple stones adorns her. Over her head and shoulders she wears a veil with a large golden headpiece resembling a halo. Her familiar, a tiny turtle, always sits at the top of her head and speaks to her, often giving her extra insight on her surroundings.

Nafizah helps run the government of Prakra along with her parents. In her free time she enjoys flower arranging and antique collecting.

At first she seems very distant and lost in her own thoughts, but when she tunes back in to her physical surroundings, she does so with a startling amount of intensity and awareness. She seems to not care about how odd her behavior is and how other people perceive her.

She arrives in Vesivia along with her sister Natiqa and the Prakran court on the first day of the Masquerade in Book XV - The Devil.

Portia seeks out Nadia and the apprentice to warn them about the princesses' arrival. Nadia and the rest of the party meet the Prakran retinue at the ballroom. Natiqa soon shows herself out of conversation, leaving Nafizah alone with them. When Nadia inquires about her turtle, she says she wanted to show him Vesuvia, and that according to him the city's aura is quite murky. Then she proceeds to warn Nadia about future challenges and assures her she has her full support.

Julian and the apprentice are introduced to Nafizah when they seek out Nadia after the meeting with Lucio. 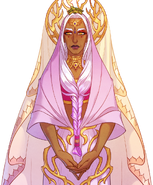