Nasrin is the Queen of Prakra and the mother of Nadia. Her patron Arcana is The Empress.

Nasrin is a stately older woman with long, curly white hair, brown skin and golden eyes. She wears a regal white gown with gold details on the chest and skirt, and a translucent coat. Her hair adorned with golden headpiece resembling lotus flower.

As Queen of Prakra and matriarch of the Satrinava clan, Nasrin is regal and intelligent. Behind the queen's appearance lies a deeply caring and compassionate person who is always ready to support her motley family. 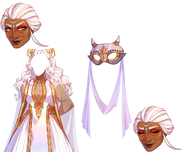