Navra is the third oldest of the seven Satrinava sisters. She is able to see the auras of others and is an accomplished dancer. Her patron arcana is The Moon.

She has orange hair in a loose braid to the side. She wears a blue dress with orange trim and a red panel down the front and a piece of scalloped gold fabric to the side; along with gold bracelets, a gold belt, and two strings of pearls in her hair.

Navra appears to be quite a joyful and easy-going woman who likes to have fun. She also claims she can see the aura of others, and makes note of the apprentice having a particularly nice color. She's a bit protective of her sister Nadia, but after seeing how much happier the Apprentice makes her, she approves of their relationship.

She first appears in Nadia's route where Nadia takes the Apprentice to the ballroom and she excitedly greets the two of them. She even goes up to the Apprentice and makes note of their aura color. 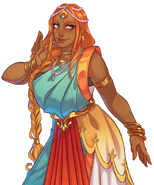