Brown Point
Pepi is Portia's house cat and familiar. Portia talks openly to Pepi, though she is too preoccupied with how delightful she finds her to see her as anything other than a pet.

In Portia’s route, Pepi is seen following her around almost everywhere. She winds up, along with Portia, outside of the apprentices room late at night. The apprentice is then introduced to Pepi, who begins to rub up against their legs playfully and Portia exclaims how both of you are "fast friends." If the apprentice'll choose to climb out of the window she'll tell a story how once when climbing the wall Pepi’s claws got caught in the ivy.

The apprentice and Julian meet Pepi in Book VIII, when they end up at Portia's cottage after the adventures at the palace. Whilst they both are conversing among themselves, she hops onto Julian's lap and does not move from it for a while. 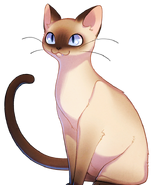