Scout is a magical being that resides in the realm of the Arcana. They are the dog-headed innocent, a guide to the lost and protector for the traveller. They are a part of the Fool as well as the Fool's familiar. They show up when the Apprentice is in trouble or lost and can lead the Apprentice both into safety or into danger. It is up to the Apprentice to choose when to follow Scout.

They are a character introduced in all three routes of Book XVI - The Tower. However, they appear earlier in Lucio's Route. The pronouns they use will match those of the Apprentice.

Scout appears as a childlike humanoid dog. They wear a beige scarf that covers part of their head and a white and brown cloak. They also carry a wooden staff and a large backpack.

Its appearance is similar to the little white dog accompanying the Fool in the Rider-Waite Tarot Deck.

Scout only communicates with gestures and barks, yet it isn't very difficult to interpret what they want you to do, which is to follow them. They have a generally cheerful air about them and appear to want to help.

The Magician insinuates that you should recognize Scout, and that they should be familiar to you, yet they are not. However, they seem kind and trustworthy, despite the Apprentice not knowing who they are.

Asra seems to think they could be one of the Major Arcana, or perhaps a part of one, namely The Fool. Though he doubts it because if Scout was a Major Arcana, they should be able to talk, and the fact that they can't is peculiar. In any case, he doesn't think they mean you any harm. 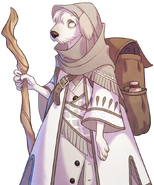