Tasya Devorak is a mysterious character who appears in Portia's route, in Book XI - Justice.

Tasya is a tall statuesque woman with pale skin dotted with moles, wall of red curly hair and smiling blue eyes. Her face consists of sharp bold features, which look surprisingly harmonious together.

Her attire is as luxurious as the woman herself. She wears an elegant teal gown belted with broad golden sash, a rich russet furs and a broad-rimmed heavy decorated hat. Many expensive jewelries glinting on her person, and she keeps a coquettish feather fan always with her.

After transforming into her powerful, god-like figure, Tasya's hair flows from red to magenta to a light blue at the ends. She wears a skin-tight black outfit and appears to have claws and black feathers at her hips and wrists. Her eyes turn bright blue with black scleras, and she has multiple black horns coming out of her head.

Tasya, who's full name is Anastasia, is a mysterious and extremely wealthy woman who seems to own numerous luxurious properties, such as mansions and vineyards.

She seems to care deeply for her family, even to the point where she is willing to commit corrupt acts and hurt people in order to protect them or bring them back. After her daughter, Lishka, died, she becomes blinded by grief and obsessively motivated with stopping death.

Tasya is Julian and Portia's aunt and seemed to be close with their mother and father. She also had a daughter named Lishka, who she described as being extremely curious yet also gentle. One day, when she was sailing with her then inexperienced naval crew, they were caught unawares by a storm that threatened to sink the whole ship. Tasya became desperate, and pleaded for anyone to save them. She caught the attention of a demon, who promised her safety from the storm in exchange for the first thing that she saw when she went belowdecks. She agreed to the deal, with the plan to go straight to the cargo hold containing her valuables. However, Lishka immediately came running up to her, happy to see her mother alive and seeking comfort. The demon then demanded she hand Lishka over, to which Tasya refused. She ran, and her ships ultimately were able to escape the demon's wrath. However, with her deal left unfulfilled, a storm began following her and her crew around.

One day, while she and Lishka were sailing with Julian, Portia, and their parents, the storm finally caught up to them, being described by some as bigger than any natural storm. It ruined the ship, killed Julian and Portia's parents, left the Devorak siblings abandoned on an island, and Tasya's beloved Lishka washed overboard and died. Consumed by grief for her lost daughter, Tasya became obsessed with bringing Lishka back and began to plot an elaborate plan to do so. Eventually, her plans morph into defeating death itself instead of solely bringing Lishka back, which she attempts to do so by utilizing Vesuvia's canals and magic power, but her plans come to a halt in both endings. In Portia's Upright ending, Portia and the Apprentice force her to confront the truth , and Portia is able to convince her to move forward. In her Reversed ending, Portia decides the only course of action would be to kill Tasya, which she accomplishes, while sealing away all magic from their world forever.

Tasya shows up after the recess in Julian's trial, offering her help. She convinces Portia and the Apprentice that the best way to ensure Julian's innocence being declared is to bribe the Courtiers who are responsible for deciding the verdict, especially Valerius and Vlastomil. At a dinner with the Courtiers, Portia, and the Apprentice, she convinces Vlastomil to declare Julian innocent by flattering him and promising him a clew of rare worms. She later convinces Valerius to stop prosecuting Julian by promising him an expensive vineyard.

At Julian's trial, with Tasya's help, he is declared innocent, and Portia jubiliantly thanks her. Tasya begins to assist with masquerade preparations and gifts Portia with an expensive necklace. At the Masquerade, Tasya gathers the Apprentice, Portia, Julian, Asra, Nadia, and Nadia's family in a room, proposing a toast with wine that the Apprentice notes tastes off. She then gives an odd speech about death and having the power to bring people back from the dead, revealing to the Apprentice that Asra did so to save the Apprentice. At this time, the palace begins to shake and those who drank the wine black out.

In Portia's upright ending, she and the Apprentice decide to convince her to give up the magical power she absorbed and restore their world to normal. They infiltrate Tasya's stronghold in the palace to speak with the Devil, and he tells them the truth about the storm that killed Lishka. They bring this information to Tasya, and she enters a state of anger and denial, until Portia and the Apprentice finally convince her to see reason. She relinquishes all of the power that she acquired, and the world returns to normal. She then dedicates her life to restoring the physical damages she caused in Vesuvia in honor of Lishka, and in a final goodbye to Portia and the Apprentice, she wishes them well and resolves to visit other places that the Storm damaged.

In Portia's Reversed ending, she instead decides to kill Tasya, and she along with the Apprentice and their friends, come up with a plan to lure her outside of the magical bubble surrounding Vesuvia, where she would be vulnerable. She and the Apprentice infiltrate the Palace, looking for something belonging to Lishka, and then make their way to the edge of the bubble where, after giving up a large amount of their blood, they break out. The Apprentice casts and illusory spell on Portia, which makes her looks just like Lishka, while Asra, Nadia, and Julian lead Tasya to the bubble. Tasya falls for the trap and leaves the bubble and hugs the image of her daughter. Portia and the Apprentice take their opportunity, utter one final apology to Tasya, and stab her through the chest. Her body then begins to explode, with all of the magical power she absorbed being released uncontrollably, which also creates a rift into the magical realms. The last interaction they have with Tasya is throwing her dead body into the realms of the Arcana, which severs the connection between the realms, and removes any and all magic from their world. 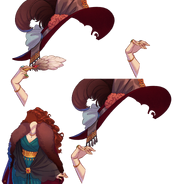 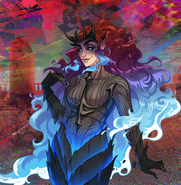 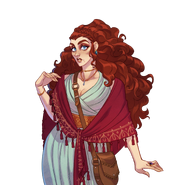 Tasya's outfit at the end of Portia's upright route.
Community content is available under CC-BY-SA unless otherwise noted.
Advertisement