The Devil is the fifteenth of the 22 major Arcana in a tarot deck. He first appears in Nadia's route, at the end Book XIV - Temperance. However, he makes his first full appearance in Book XV - The Devil.

The Devil appears as a humanoid goat with white fur. His eyes are red with black sclera. Unlike Lucio's ghostly goat form, the Devil has two pairs of black horns. One pair curls around his head, while the other curls upward. His ears are long and droopy, unlike Lucio's stiffer, pointer ones. He has a black, vertical eye-like marking on his forehead. His claw-like hands are a black that fades into dark brown, and then into the white of the rest of his body. The Devil is clothed in a short red drapery that resembles a scarf, and a black and gold vestment similar to a liturgical stole.

The form he takes, the goat-headed Devil, is the same as the image on the Devil card of Asra's deck.

Since he is one of the major Arcana, he is an archetype, a form of pure and ancient energy in the human subconscious. His archetype represents self-inflicted suffering and the toxic thoughts and behaviors of humanity that lead to the feeling of being trapped.  As an individual, the Devil is a manipulator and a charismatic tactician. Although almost scarily cordial, he is in no way warm with his words, nor his presence. He speaks in almost riddles, giving away none of his true intentions in the honeyed promises and deals that he offers to the main cast. His deals are always too good to be true, as he plays on his words to convince those he deals with that they're making the right decision.

Interestingly enough, he shares a similar thought with the rest of the love interests: a distaste for Count Lucio. He claims that Lucio "was [his] underling" and looks to "liquidate [his] assets" involving Lucio, calling him a "bit of a liability" at this point. In all three routes, he makes it known that he isn't fond of or happy working with Lucio.

The Devil wants to permanently merge the Arcana realm with the human realm. He wants to see what will happen in a world where the power of the Arcana and the unpredictability of human magic mingle. Doing so would wreak havoc and create a world where nothing changes, and nothing ends. His motive behind this plan seems to be that of a bored child's curiosity. He simply wants the entertainment that chaos would bring.

He wants people to take action to satisfy his desire for entertainment, and eggs them on in hopes of something he finds interesting happening.

While none of his abilities are explicitly stated, he appears to be able to shapeshift, much like the Magician. He takes the form of the High Priestess in both Books XIV and XV of Nadia's route, and the Hanged Man in Book XV of Julian's route.

When someone makes a deal with him, they become bound by invisible chains. The more deals with the Devil someone makes, the more corrupted they become, until they eventually become a demon. These demons are then bound to his will with no escape. He has made deals with Lucio, Valdemar, Vulgora, Vlastomil, Volta, Valerius, Aisha, and Salim, all with the goal of furthering his devious plans.

He claims in Nadia's route that it is "within [his] abilities to remove Lucio from the equation for good" in three days time as long as Nadia did not interfere with him. However, he does not explain how he would go about this, remaining ambiguous on his methods of removing him.

He claims something similar in Julian's route. Instead of offering to kill Lucio, he instead offers the cure to the plague, telling both Julian and the Apprentice he will be able to end it for good. He makes no mention of how he will cure the plague, however he does say that stopping the plague is "only a trivial effort for one as [him]self." This seems to imply that he would handle Lucio, as the Count is the source of the plague. It is also possible that the plague itself comes from the Devil's powers, as Vlastomil, the one who made a deal with Lucio, gets his powers from the Devil. 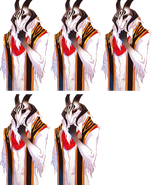 The Devil as he appears after having his powers drained by Tasya.
Community content is available under CC-BY-SA unless otherwise noted.
Advertisement