Gray
The Hermit is the 9th of the 22 Major Arcana in a tarot deck. He first appears in Muriel's route, during Chapter 1 of Book XVIII - The Moon.

The Hermit appears as a large gray humanoid bear with deep green eyes. His forehead is branded with a swirled golden symbol. He wears a ragged gray cloak, similar to Muriel's. In his hand he holds a curved wooden staff from which a lantern hangs.

The shape the apprentice sees him as, the bear-headed Hermit, is the same as the image on the Hermit card of Asra's deck.

Since he is one of the major Arcana, he is an archetype, a form of pure and ancient energy in the human subconscious. 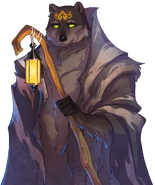