The Palace is one of the central settings for The Arcana, with many minor locations inside. The Palace is set high above the city of Vesuvia, and requires a long, exhausting trek to reach. The Palace is secured by patrolling guards, a moat, and an iron gate that blocks the bridge to the Palace's main entrance.

The palace is the location for the annual masquerade.

The palace has a large library that has fallen into disuse. The library is guarded by a door with a series of complicated locks. This lock was designed by Nadia. Each lock can only be opened by its corresponding key, attached to which is a matching gemstone. The entire lock appears as a giant tree. The Apprentice is granted entry to the library for their investigation. The library itself is full of books and has a large window with a view of the garden and the tree that Asra liked to lounge under. Julian had a desk here, which has been searched as a part of the investigation for clues, but the Apprentice is still asked to search it again in case they missed something. During the search, the apprentice can either find Julian's letter to his sister, or scribbles of red beetles.

The library is visited in many routes, but Julian's route reveals that there are at least two hidden passages in the library - a portal made by Asra that leads to the garden, and a passageway to the dungeon that Julian worked in.

Behind the palace is a large garden with many twists and turns. Many areas of the palace look on the garden, including the veranda. The center of the garden has a large fountain that the apprentice uses to communicate with Asra. The fountain is topped by a statue of a sea goat. The garden has at least two secret passages, one being a portal that leads from the library to the garden. The other is found in the maze of the garden, which leads to the abandoned wing. There is also a hidden door that leads outside the palace - this is the same door that Julian escaped from after he was accused of killing Count Lucio. In Julian's route, the apprentice can use this door to leave the palace grounds.

Portia's cottage is found deep in the palace garden. It is far enough away from the palace that she is largely left alone, but close enough that she can quickly access the palace if she needs to. She lives there with her cat, Pepi. During Portia's route, the cottage becomes a safe haven when the palace is destroyed by rogue magic.

The maze is an area of the garden. The apprentice enters the maze when following one of the palace guards in the prologue. There is a secret entrance to the abandoned wing that can be found in the maze.

The abandoned wing is a disused area of the palace that no servants go near, due to rumors that

it is haunted. This area used to be Lucio's wing, and the walls of the hallway are lined with portraits of him where his eyes are all gouged out. The Apprentice can visit the wing several times, during which they can sense the 'ghost' of Lucio. He will occasionally reach out and attempt to talk to the apprentice.

When the routes begin, the master bedroom of the wing is getting renovated by Nadia, who is irritated by its state of disrepair. This seems to annoy Lucio, although he doesn't seem powerful enough to do much about it.

In Asra's route, he, Nadia, and the apprentice perform a seance in Lucio's bedroom to ask him questions. Lucio becomes enraged after being insulted and pushes Asra against one of the walls.

There is a large portrait of Lucio in the master bedroom, which the apprentice is drawn towards if they choose to explore the abandoned wing during the prologue. There is a secret button on the wall that reveals the painting is the entrance to Lucio's private dining room.

This is where the Apprentice stays when invited by Nadia to the Palace.

It has a sofa-like bed with a canopy, large windows, and two launterns hanging from the ceiling.

According to Portia, this is one of the other parts of the palace besides the abandoned wing that is said to be haunted. It is on the other side of the Palace, far from the guest room that the apprentice stays in. It was once inhabited by Aedile Velos, who was investigating the claims of it being haunted.

The dining room is where Countess Nadia takes her meals, and where she entertains guests.

It is extravagantly decorated in shades of red and gold. There is a large painting on one wall featuring a humanoid goat surrounded by other animals. Nadia tells the apprentice the goat is meant to represent Lucio.

Nadia has a large bedroom in the palace. The room is q

uite colorful, featuring orange, pink, purple, and blue colors. In the middle of the room, there is a rounded bed with a plush canopy around it. At the top of this canopy, there is a statue of an owl with wings outstretched. This owl resembles Chandra. Behind the bed, tall stained glass windows make up the wall. In Nadia's route, the apprentice can accompany Nadia to her bedroom, and the two can rest on the bed together.

Nadia's contemplation tower can be accessed through a tall hidden door in the room. It is described as being made from a rich tyrian amaranth wood, and is decorated with two carved cranes holding pomegrantes. Pressing one of the pomegrantes reveals a wooden panel with a keyhole.

Nadia has a secret tower that can be accessed through the secret door in her bedroom. One reaches the tower after traveling up a set of marble stairs. The apprentice can come here in Nadia's route, where she reveals they are the first ever person she has invited into the tower. The room is described as smelling like jasmine, and has tall marble walls inlaid with gold designs. These designs surround three eyes that weep water into a pond. There are several stained glass windows on each wall facet.

The salon is the sitting room where Nadia entertains guests. It is here that the apprentice meets the courtiers for the first time during the prologue. During Nadia's route, the apprentice looks through the eyes of the painting on the wall to eavesdrop on the courtiers.

During Lucio's route, Morga throws the painting on the wall into the fire, as it is meant to resemble her.

The veranda is an area of the palace that overlooks the palace gardens. During Nadia's route, she and the apprentice interrogate Valerius during a game they play on the veranda.

The dungeons lie underneath the palace. During the plague, the dungeons were utilized by the doctors employed by the palace, including

Julian and Valdemar. Here, experiments were conducted, often on live patients. The apprentice first enters the dungeons in Julian's route. Valdemar gleefully takes them on a tour, to the apprentice's growing horror. Julian had a small office in the dungeons that he was locked in to encourage him to focus on finding a cure.

The dungeons can be reached through a secret passage in the library. 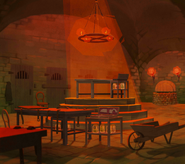