Consul Valerius is a palace courtier who was reportedly a key witness to Lucio's murder, along with the other members of the Countess's court. His patron arcana is The Hierophant.

Valerius is a relatively young Consul, always seen in an elegant robe that reveals much of his status. He rarely appears without a glass of wine in his hand.

His long black ombre hair is woven into a braid that is draped over his shoulder. He wears a dark beige and white robe with shiny golden ties and lining, while a dark shawl is wrapped around his shoulders. The shawl is adorned with what appears to be a golden ram head, perhaps alluding to some closeness to one of the major arcana, the Hierophant.

While generally calm and collected in public, Valerius has proven to be a ruthless conspirator, wishing to take control of Vesuvia from Nadia. When his plans go awry, he is quick to lose his temper.

In Nadia's route (Chapter II of Book VI - The Lovers), he seems strangely interested in the apprentice; the expression on his face is described as 'morbid curiosity.'

Little is known of him beyond his fondness for drama and wine. During the period while Nadia was asleep, he and the rest of the courtiers were responsible for the daily running of the city; when the Apprentice ventures into the city with Nadia, it is evident that they did not do a very good job.

Valerius is seen again in Nadia's route, Risky Maneuvers (chapter two of Book VI - The Lovers), when he and Nadia play an unnamed board game. It is set the morning after the spilled wine, and Nadia continues to harbor ill feelings towards him for his actions. He initially appears supportive of Nadia's initiatives and aims, though a tarot reading conducted by the Apprentice reveals that Valerius has his own agenda.

In Nadia's route Book XI - Justice, Valerius makes where he stands clear: he does not agree with the Countess and would prefer to see the city under his rule. Portia and the apprentice eavesdrop on Valerius with the other members of Nadia's court, where they discuss some sort of plan that will work in their favor. 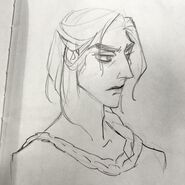