Praetor Vlastomil is one of the five members of the Countess' court. He acts as a magistrate of the city-state of Vesuvia. His patron arcana is Justice.

Described as a 'limp noodle with fancy clothes', Vlastomil is a bony, deathly pale man, clad in black from head to toe. His hair (or what's left of it) is grey and his eyes are pale and discolored. His ears are slightly pointed. He wears what appears to be a court dress with a red beetle brooch clasped to a white shawl. He also wears a black and white Tudor bonnet with a large gray feather attached.

His demonic form resembles a large, glistening worm with a facsimile of his face attached to a long neck, and large, spindly hands.

After being unbound by the Devil's chains in Nadia's route, Vlastomil becomes more human looking. The color returns to his skin and eyes, and his ears become rounded.

To say Vlastomil is very keen on worms is an understatement. A "worm genius" by his own accord, he made a deal with the Devil to devote an eternity to his worm-passion. His estate is just one giant vermitarium with a multitude of worm statues decorating the exterior and a myriad of rooms designated as a habitat for worms of all types and sizes. As a side project, he has a room for the infamous red beetles, as well as a room full of butterflies, the most pleasant of any of his pets. Anything that does not involve worms holds little interest for Vlastomil. He shows great excitement in holding conversations regarding his worms, shown during his conversation with Nasmira. However, other matters, even those of importance, are either ignored or handled poorly by Vlastomil. He, like the other courtiers, is largely incompetent in matters regarding the running of Vesuvia.

Vlastomil bonded with the Devil a very long time ago, several generations in the past. Once a renowned wormologist, Vlastomil traded his soul in exchange for eternal life to study his most beloved children. He hasn't been human for a long time.

Much, much later in his life, he made a deal with the young, opportunistic heir of the Scourge of the South tribe. The young Lucio was seeking the Serpent of Destruction, Vlagnagog, to help accelerate his rise to power. Instead, he meets the Worm of Pestilence, who tells him that Vlagnagog is dead. Lucio deals with him instead, telling the demonic Vlastomil that he will give him his parent's hearts in exchange for a powerful sickness that will weaken them. It's implied that this deal, ultimately left unfinished on Lucio's end, began the spread of the red plague.

Vlasomil was at the banquet Lucio hosted with the rest of the Court, the Countess, Asra, and Julian on the first night of the Masquerade. They participated in the magical ritual that was meant to replace Lucio's dying body with a new one, although he claims has no memory of it.

The Apprentice first met him during the Prologue with the rest of the courtiers when Nadia introduces them to the court. In all routes, he presides over Julian's trial when/if it occurs. By his behavior, it's not hard to see that he has no idea what the position of a judge consists of.

In this route, Nadia and the Apprentice get a chance to know Vlastomil and his pets more closely than they possibly wanted. The visit to his estate consists of (obviously) worm wrangling, a very awkward tea party and an increasingly confusing interrogation. Later, Vlastomil participates in Valerius' plan to overthrow Nadia's rule so that their plans may continue unhindered. By the end of the route, the Apprentice can free him from the chains tying him to the Devil and return him to his human appearance. This surprisingly causes him great distress. 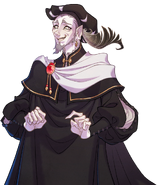 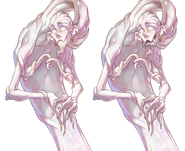