Procurator Volta is one of the five members of the Countess' court, and is in charge of the city's food. However, she has been hoarding supplies while many inhabitants starve. Her patron arcana is Temperance.

Volta is a short woman with tiny features. Under her baggy clothes, she is very thin. She has curly, reddish-brown hair that pokes out from beneath her hat, and her skin is a sickly greyish color. Among her most notable features, she has a sharp snaggle-tooth sticking up from her bottom lip, as well as a lazy right eye that is completely white in color, appearing to be blind. Her left eye is a tawny brown color.

She wears a large black robe with a white turtleneck and a white cornette hat, giving her a resemblance to a nun. She has a red beetle broach clasped to her chest, adorned with two dangling ornaments.

Volta's demonic form is a small, furry creature with wings in place of ears and the tail feathers of a bird. The creature has a large, gaping mouth with rows of jagged teeth and rib bones covering the chest.

When freed from the Devil's chains in Nadia's route, Volta becomes more human in appearance. The color returns to her skin, her snaggle-tooth disappears, and her pupil rounds out.

Volta is always, always hungry, and this fuels her motivations throughout the story. She is always looking for a chance to eat, whether it be red beetles or a fancy feast with the countess. She isn't very patient and is rather whiny, especially when she knows there is food around and she can't find it. She doesn't appear to have personal boundaries, and is quick to get very up close and personal with the apprentice and other characters, sniffing them and even sneezing right on the Apprentice's wrist. However, she is very meek and can be easily intimidated. This has caused her to be controlled by her fellow courtiers. She goes along with their plans and machinations, despite not wishing harm on the countess, due to her insatiable hunger. Despite this, she does not appear to be as malicious as the other courtiers and holds no love for them, quick to side herself with the apprentice in several routes.

During an unknown time, in an unknown place, Volta was human. Left starving for weeks and weeks, she ate the leather off of her shoes, and gnawed on bones in a graveyard. The Devil appeared to her and told her he could feed her. Left cruel and desperate in her hunger, she took the deal and bonded with the Devil. She was not aware she had been tricked, as the Devil had told her she would be fed, but not that she would be satiated. As a result, Volta spent the rest of her existence desperately and obsessively eating, losing much of her empathy for others. Much like the other courtiers, her human form eventually disappeared behind the monstrous form that took its place. She hasn't felt full in a long time.

As Volta can smell the presence of the plague, she helped the palace distinguish between food that was and was not contaminated.

She was said to be one of the courtiers who saw Julian Devorak walk out of Count Lucio's room after the count was set on fire. However, it was revealed she was at the banquet Lucio hosted with the rest of the court, the Countess, Asra, and Julian on the first night of the Masquerade. She participated in the magical ritual that was meant to replace Lucio's dying body with a new one, although she has no memory of it.

In Asra's route, Book X - Wheel of Fortune, during Asra's and the Apprentice's meeting with Nadia, Volta and Vulgora arrive at the palace. Hungry as usual, Volta interrupts their dinner while also bringing the news of a large swarm of red beetles. Before she leaves to head to Vulgora's mansion, Asra stops her and asks her if she could smell him and the Apprentice for the plague. She sniffs them thoroughly, sneezes, and proclaims the Apprentice smells sweaty, but seems to avoid telling them they have no plague.

In Nadia's route, Book X - Wheel of Fortune, Vulgora and Volta are invited for dinner with the Countess in an attempt to learn more about what the courtiers are planning. The two are seen as the weakest links and the most probable of revealing any information. If the Apprentice decides to read Volta's fortune, they pull the Temperance card, reversed. The Arcana's warnings are urgent and reveal that Volta is empty, and will never fill herself up. It also insinuates that she is, similarly to Vulgora and Vlastomil, not quite human.

In Book XI - Justice, only she has reservations about Valerius' coup. Despite Nadia previously forcing Volta to redistribute her food stores to the masses, she is still fond of her (largely due to her banquets.) Volta is the one who points out that Valerius doesn't have any evidence to accuse Nadia of murder. Because of these reservations, the Apprentice can press Volta during the trial to turn on the consul, protecting her "lovely, snack-providing countess."

In Julian's route, Book X - Wheel of Fortune, Volta visits Lucio's room with Vulgora, believing that Lucio is still present in the palace. However, she quickly gets distracted by the scent of the lunch that is being prepared and leaves. 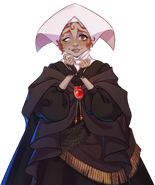 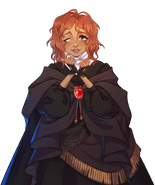 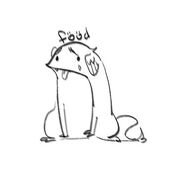