Pontifex Vulgora is one of the five members of the Countess' court, selected by Count Lucio. Their main occupation is to 'party hard and smash things'. Their patron arcana is The Tower.

Vulgora is a stubby person of pallid complexion. Their cheeks are flushed pink, and their eyes are bright yellow and slitted, a feature shared with the other courtiers.

Their clothing consists almost entirely of the color red, except for a dark coat and embellishments of gold, making them stand out harshly. They wear a complex headdress resembling a pair of horns and a ruby beetle brooch attached to their red neck scarf. Their puffy sleeves end in a pair of clawed metal gauntlets.

Vulgora is rowdy, loud, and volatile with a short temper to match. They have an obsession with destruction and violence, and the only thing that truly interests them is war and similar violent entertainment, such as the fights in the Coliseum which they are very enthusiastic about. Despite calling them nothing but a warmonger, Nadia cannot help but admit their vigor on the battlefield has been most valuable to Vesuvia.

There is little known about Vulgora's past. Sometime in the past century, they made deals with the Devil and ultimately gave their soul to him in exchange for prolonged life and demonic boons. Their reasons for making their first pact are uncertain but the ultimate price was harsh - a lifetime of bondage in the Devil's service.

Vulgora was at the banquet Lucio hosted on the first night of the Masquerade. They participated in the magical ritual that was meant to replace Lucio's dying body with a new one, although they claim to have no memory of it.

Vulgora is first seen in the Prologue when the Apprentice is introduced to Nadia's court.

Vulgora first appears in Asra's route when they and Volta barge in (and eavesdrop) on Nadia's audience with Asra and the Apprentice. Later, during the trial, Vulgora and the other courtiers testify against Julian and Asra. They were ecstatic when the Scourge of the South arrived, believing the ensuing violence would make the boring judicial proceedings more fun. However, they leave unsatisfied - the fight ends without proper bloodshed. They later appear alongside the other courtiers at the ritual during the Masquerade. They and the other courtiers devour Lucio's soul as payment for his unfinished deals with them.

Book X - Wheel of Fortune, chapter 2: Vulgora and Volta are invited for dinner with the Countess. If the Apprentice decides to read Vulgora's fortune they pull The Tower card, and it reveals that they, like Volta and Vlastomil, are not quite human. The dinner ends in a squabble between the courtiers that angers the Countess, and she makes them leave.

Book XI - Justice: In chapter 2, the Apprentice eavesdrops on all five courtiers, and listens as they discuss a plan to frame Nadia for murder. Vulgora reveals that the other courtiers will go along with the consul's coup only because Nadia is getting in the way of their plans as well. In chapter 3, the courtiers are called to testify at Nadia's trial. If the Apprentice calls Vulgora as a witness, they testify that the Countess killed her husband herself, ultimately ruining Valerius' case.

Book X - Wheel of Fortune: In chapter 2, Julian and the Apprentice briefly encounter Vulgora and Volta in the abandoned wing. The two take the Apprentice by surprise when they bang on the door of Lucio's room and demand his attention as if he's still alive. The Apprentice is saved from discovery by Volta's everlasting hunger and need to find food, and the two leave. 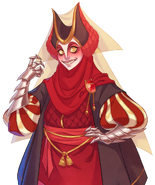 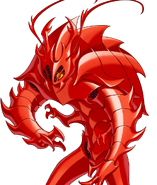